The paths dogs take on group walks reveal their personality traits as well as the leaders of the pack, according to a new study. 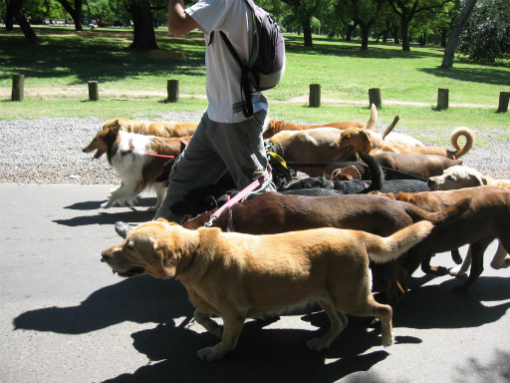 Amazingly, researchers can describe most major traits of a dog sight unseen.

“We showed that it is possible to determine the social ranking and personality traits of each dog from their GPS movement data,” study co-author Máté Nagy of Oxford University’s Department of Zoology said in a press release.

Researchers analyzed data from GPS devices that were attached to harnesses worn by the dogs, according to a study published in PLoS Computational Biology this week.

“On individual walks it is hard to identify one permanent leader, but over longer timescales it soon becomes clear that some dogs are followed by peers more often than others,” Nagy said. “Overall, the collective motion of the pack is strongly influenced by an underlying social network.”

Dogs that consistently took the lead during group walks were more responsive to training, more controllable, older and more aggressive than the dogs that tended to follow, according to the study.

Dogs that led more often had higher dominance ranks in everyday situations. This was assessed by a dominance questionnaire filled out by the dogs’ owners.

“The dominance questionnaire tells us the pecking order of dog groups by quantifying interactions between pairs,” said the study’s senior author Enikő Kubinyi, from the Hungarian Academy of Sciences.

“For example, the dogs that bark first and more when strangers enter the house, eat first at meals, and win fights are judged as more dominant. Conversely, dogs that lick other dogs’ mouths more often are less dominant as this is a submissive display.”

It’s known that wolves exist in clear hierarchies. A single breeding pair of wolves leads most packs. Animal experts, however, continue to debate whether domesticated dogs have a clear social hierarchy. At the very least, when a dog walker takes out a bunch of dogs, there’s no guarantee that the group will include a pair that’s mated.

“These dogs (from the study) have no breeding pair,” Kubinyi said. “However, there are dogs who take the lead more often than others. On average, an individual took the role of the leader in a given pair about three quarters of the time. This ratio is of similar magnitude to the case of wild wolf packs with several breeding individuals.”

“Using this qualitative data over longer time scales allows us to see the more subtle relationships that might otherwise be missed,” he continued. “Of course, hierarchies are likely to vary across breeds and individual groups, so we hope to use this technology on other animals in future to investigate further.”

Aside from learning more about social hierarchies – which exist among humans too – the researchers hope that this way of studying dogs could help to create optimal pairings of dogs used for important tasks such as search-and-rescue operations. The method could determine how well certain dogs work together, putting together those with the highest compatibility.

Why Dogs and Cats Eat Grass

As a loving and devoted pet owner, you probably take…

By Lorie HustonJun 9th 2014 June has been designated…